The Control Binding system allows you to customize the mapping of input data received from your attached XBO Fight Stick to the input data sent to the Virtual XBox 360 Controller.

Control Bindings are configured using profiles. Multiple profiles can be created and each profile can define its own mappings. This allows you to configure specific profiles for specific applications.

The Control Binding system also introduces the concept of alternate bindings. Simply put, this enables you to configure two different bindings for a given control on your XBO Fight Stick. Access to the alternate binding for a given control is provided by the XBox Guide Button which has been repurposed to function as a modifier button, similar to the Shift key on your keyboard.

The utility of the Control Binding system may not immediately obvious but once you consider that whereas a XBO Fight Stick provides 15 unique inputs (11 buttons and 4 directions) the Virtual XBox 360 Controller has many more (2 analog thumbsticks, 2 analog triggers, 4 directions and 11 buttons) the possibilities might be a little clearer, especially when you consider that certain games only function correctly when analog directional input data is received…

Finally, as a XBO Fight Stick user you may have concerns as to whether or not the Control Binding system as has any performance impact on the flow of data from your device to the software you are using. You can rest easy in the knowledge that due to optimizations introduced in v1.0.0 of XBOFS.win there is no impact terms of performance when using the Control Binding system.

Clicking the Add Profile button will present a dialog allowing you to enter a name for the Profile. The name of your profile must not exceed 256 characters, if it does the trailing characters will be removed. 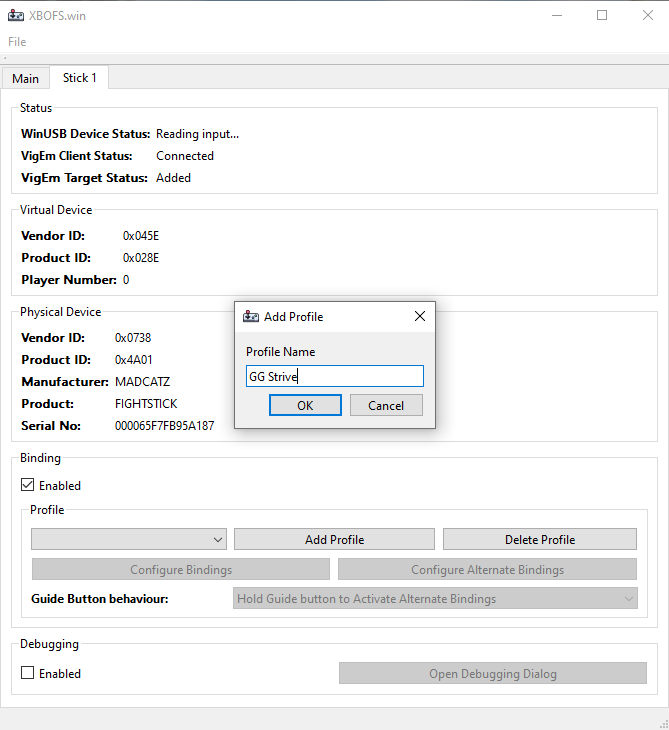 Once you have created a profile the remaining elements of the Control Binding interface become available. 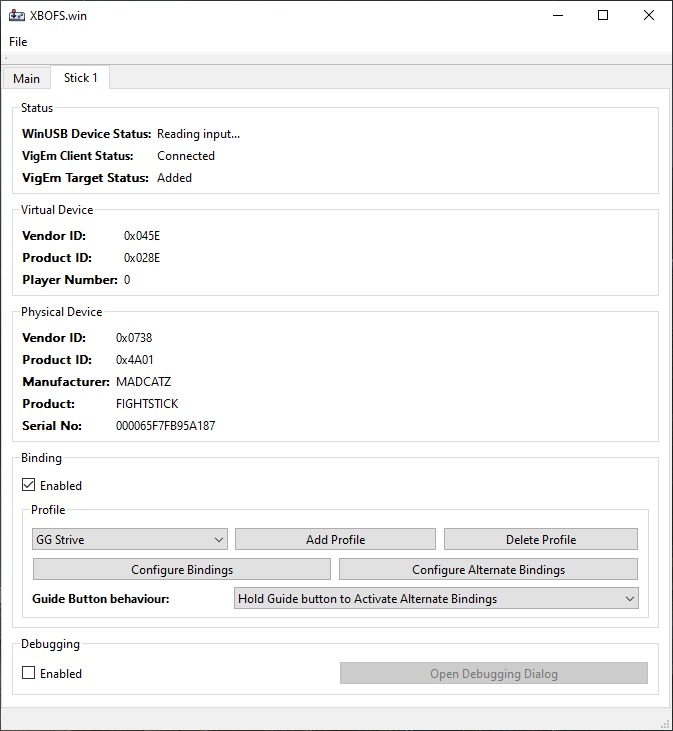 This section will provide a quick run-through of the whole Control Binding interface.

The Binding Configuration dialog presents you with a visual representation of the controls available for binding on the XBO Fight Stick.

The XBox Guide Button is not available in this dialog as when Control Binding is enabled the behaviour of the said button is used to control whether regular or alternate bindings are active.

Clicking on a control button in this dialog will open the Control Binding dialog for that button.

The Control Binding dialog is used to configure the input data that will be sent to the Virtual XBox 360 Controller when the given button or direction is received from the XBO Fight Stick. 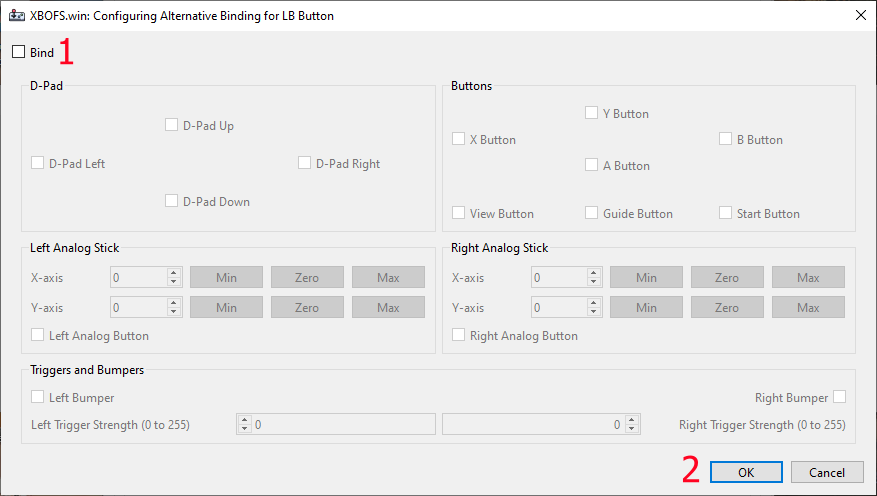 When Bind is checked the remaining controls in the dialog become enabled: 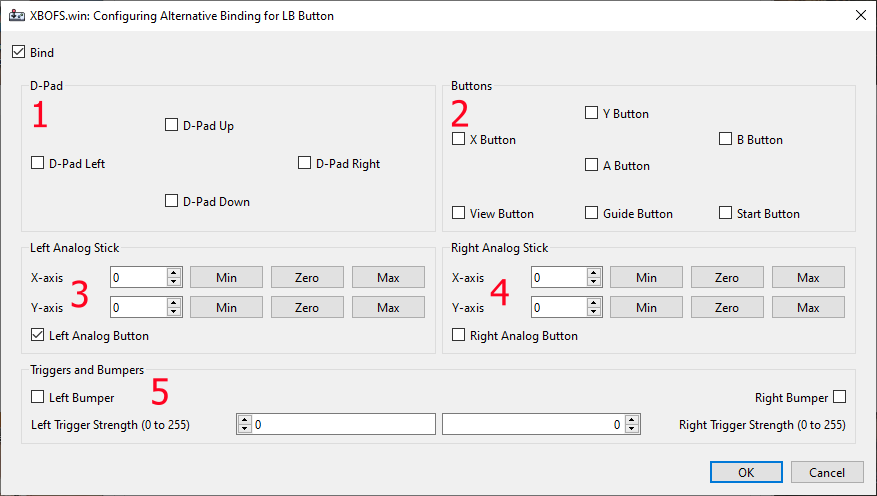 Notes on the Triggers and Bumpers section

The sample configurations list below exist to give you an idea as to what the Control Binding system can be used for.

The purpose of this configuration is to allow the Left and Right analog buttons to be used in the Training mode to trigger the Start Recording and Stop Recording actions.

Fun fact, this configuration was the reason I did all the work on the Control Binding system as GG Strive’s inability to allow multiple button bindings to be used to trigger the Start/Stop Recording actions made it impossible for me to use the Recording function in Training without overriding other bindings which annoyed me a lot.

The purpose of this configuration is to allow the Fight Stick to be used to navigate in the Krypt mode. The Kyrpt mode uses the Left Analog Stick for movement while the Right Analog Stick controls the camera. Looking up and down is not that important but being able to rotate the view left and right is. This configuration allows you to switch to the Alternate bindings and navigate the game world in the Krypt mode without needing to plug in a normal game controller. When you want to play the rest of the game you switch back to the Regular bindings.